The concept of K1 was born when CS Racing and the Singapore Motor Sports Association came together with one common goal – to develop the future of Motorsports in Singapore by raising awareness and interest among the community.

The karting circuit has always been regarded as the breeding ground for racing stars of the future. Michael Schumacher, Lewis Hamilton and Kimi Raikkonen are but a few of the stars of F1 who honed their early driving skills in go-karts. K1 hopes to identify future race drivers here by bringing karting to the heartlands where all can have an opportunity to try their hand at it.

With the support of the Ministry of Community, Youth and Sports (MCYS), the Singapore Sports Council (SSC) and the People’s Association (PA), the K1 Karting Series kicked off its tour of the heartlands on 30 Dec 2007 with a Motorsport Carnival in Punggol. Besides a chance to try out go-karting at heavily subsidised rates, residents were treated to drifting and sprint demos by professional drivers.

In the 2008 K1 Series, we brought the excitement of Motorsports to 50,000 people in 10 heartland locations. Residents there got a better idea of what F1 is about, and learnt about the different types of Motorsport, like drifting and gymkhana, while enjoying a family-friendly carnival atmosphere. 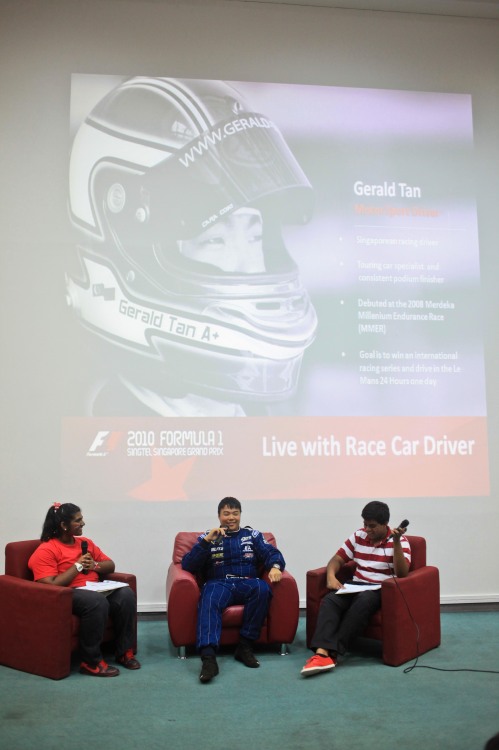 K1 Karting organized their first community karting for 2011 at the ITE Bishan Campus on the 8th of August in conjunction with the national daycelebrations. Local race car driver Gerald Tan was invited by the Singapore Sports Council (SSC) to be a guest speaker in a Q&A sharing session with the ITE students.

I have always been interested in cars. Cars have been a passion of mine since I was a kid, my parents told me that cars with loud exhaust will always catch my attention and my fascination with toy cars will keep me occupied for hours. My little toy cars turned into Tamiya cars and then to remote control cars and finally road cars. I started going to the track in 2004 and got hooked ever since.

Question:         When did you first start racing competitively?

I started competing in lower level club events like time attacks and mini 5 lap races back in 2006 but my first ever international race was in 2008, where I took part in my first 12 hour endurance race.

Unfortunately being a racing driver is not a viable daily job haha, I work in a rubber manufacturing and trading firm. My company processes raw latex and supply our products to tire manufacturing companies.

Question:        Is it physically demanding as a motorsports drivers?

Most people think that racing is easy, just sit in the car and turn the steering wheels. However, in this fire retardant attire and being in a race car cockpit where the temperature can reach up to 45 degs, it gets pretty hot. Racing drivers have to be fit to maintain our concentration especially in endurance events where 1 stint in the car can last up to 2 hours.

Question:        We usually know how an athlete would train for swimming, table tennis.  We are rather curious for motorsports drivers?  Can you share with us on how you train?

Since I started competitive driving, I focus on endurance training, I enjoy cycling and often go for 1-3 hour rides to work on my cardio performance. We have to be able to sustain a 60-70% heart rate for 1-2hours while being able to concentrate on racing.

For my physical training and conditioning I enjoy cycling and join a group where we do round island cycling on the weekends. For racing, due to the lack of facilities, I do most of my race driving at the Sepang International Circuit in Malaysia where most of my races are held. The Singapore Touring Car Challenge is held at the Johor Circuit so I do go to that circuit also. I hope that the Singapore Changi circuit will be up soon so that I can do my driving locally.

Question:        We know that there are many levels and categories of motorsports racing.  Can you briefly share with us on the progressive level?

Question:        What are the races that you’ve participated?

I started with the 12 hour endurance race and have participated in that yearly since 2008. Earlier this year I took part in my first 24 hour race in Dubai where I finished 3rd in my class. Besides endurance racing, I do touring car races in both the Malaysian and Singapore championships and take part in Time attacks where I drive for Team LTM Performance 9tro.

Question:        What is the worst race experience that you’d so far?

This has to be my first 12 hour Race in 2008 where my team was in first position after 5 hours, it was then where the car started to misfire. My team dropped from first to 10th as we pitted to fix the problem. After the problem was solved, my team fought back brilliantly into 2nd place, then disaster! The engine blew after 11 hours and 54 minutes! I was totally devastated. A podium chance down the drain.

Question:        What about the best racing experience?

My 3rd place finish in this years 24 hours of Dubai! Its a truly international field of over 90 world class teams and 400 over drivers! Rubbing shoulders with the sport’s elite while finishing on the podium is was a great feeling!

Question:        Is there any rituals that you will go through before the race?

I am not superstitious but I am a organized person with a routine, I like my race suit and helmet all laid out in a fix manner, not so much for a ritual, more for ease of use.

Question:        What are running in your thoughts when you are racing?

When I am racing, I strive to be one with the car, as cliché as it sounds, when a driver has the ability to let the subconscious mind drive and be in auto pilot, that is where he will excel! I try not to think and clear my mind of distracting thoughts when I am racing. I just focus on the job in hand, the next corner and the next car to overtake.

Question:        We had heard a lot on you being the only Singaporean in the 24-Hour Dubai.  Would you be able to share more on this race?

Yes, this is a 24 hour non-stop endurance race which tests man and machine to their limits. Teams can have 3-5 drivers who take turn to race, each driving non-stop for 1-2hours at a time. The Dubai race is special as it is the first event of the motorsport calendar, big international teams attend this event as their pre-season warm up. I was racing with multiple World Touring Car Champions, GT racing champions and DTM stars etc. It was a prestigious event and being the only Singaporean to attend the event made it that much more special.

I was the last driver who took the car to the finishing line, which made it incredible, the emotions of completing my first ever 24 hour race was beyond words. Not only did I complete the race, my team finished 3rd! I was really happy and proud to fly the Singapore flag on the podium.

Question:        What are your future career plans in motorsports racing?

I will like to focus on winning the championships which I am in this year and hopefully move into the Asian Touring Car Series and then maybe into GT racing someday if budget or sponsorship opportunities allow. In any case, I want to be in motorsports for a long time.

There are many ways to enjoy motorsports, you can start from the grassroots levels like go-karting. Its excellent that K1 karting is doing their part to introduce motorsports to the masses. Karting is the most basic form of motorsports which is relatively affordable and extremely enjoyable too! If you have tried karting and got the motorsport bug, then keep at it and you never know where your passion and love for motorsports will bring you.

Question:        What is your greatest moment in motorsports?