Gerald featured in the inaugural issue of iR: 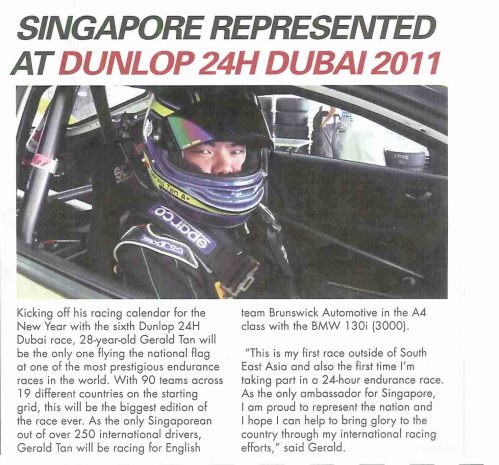 Gerald goes on The Straits Times!

Five hours into the race, the Honda Integra DC2 was leading its class and pulling away strongly when the car started to misfire. Losing position from first to 10th, the car was called back into the pits. Problem fixed, the car brilliantly fought its way up to second place when the engine blew six minutes before the end of the 12-hour endurance race.

That was how Gerald Tan’s first ever race went.

The 28-year-old Singaporean was driving for Team Webstructures/VXL in the 2008 Merdeka Millenium Endurance Race (MMER). Prior to that, Gerald was only part of a support pit crew at MMER 2004 and 2005.

“I’ve always aspired to be a racing driver myself and I honed my skills by attending numerous track events, constantly trying to improve my lap times. I decided to take the leap in 2008 and joined the MMER. Since 2008 I have competed in MME thrice and won a couple of touring car races and time attack races,” said Gerald.

Gerald has always been interested in cars since a young age, playing with toy cars and creating race scenarios in his head for hours.

His interest in motorsports deepened when he followed Andy Tan, the boss of local workshop Espace Service, to the 2004 MMER and lent help as part of the support crew. He took part in the MMER again in 2009 and 2010, but the car has unfortunately always failed the team.

Before Gerald took part in endurance races, he was a regular trackie (term used to describe people who often take their cars to the track) and even won several track day events. Slowly but gradually, Gerald began to take part in more circuit races such as the Malaysian Super Series (MSS) or the ZeroToHundred Time To Attack series.

The last quarter of 2010 was a promising time for Gerald as he won the inaugural Singapore Touring Car Challenge in September and the Touring Car class at the last round of the MSS.

Kicking off his racing calendar for the new year is the 24H Dubai race over the third weekend of January 2011. This is the sixth edition of the 24-hour endurance race and Gerald is the only Singaporean out of the full grid of 90 teams from 19 different countries.

“This is my first race outside of South East Asia and also the first time I’m taking part in a 24-hour endurance race. It is a huge event with many high-profiled drivers taking part. I am proud to represent Singapore and I’m sure I will learn a lot as well as make new friends,” Gerald shared.

He added, “My immediate expectation for the race is to have an uneventful race with minimum hiccups and a podium finish will be a bonus!”

When Gerald is not under pressure to maintain a fast time for continuous hours, he works full-time as an international representative of Rotora Inc, a USA-based aftermarket brake manufacturer. His role is to appoint distributors outside of the States, Russia and Japan. He also assists in their brake system development by testing them in races and providing driver feedback afterward.

During his free time, he plays sports such as soccer or golf, otherwise he will be at a track sharing proper driving techniques and helping friends improve their lap times.

“My objective is to win an international series such as the GT4 Asia Cup, which I’m currently raising funds to participate in. My ultimate goal is the chance to compete in the 24 hours of Le Mans (24 Heures du Mans) one day!” Gerald concluded.

Gerald Tan is in TODAY’s paper! 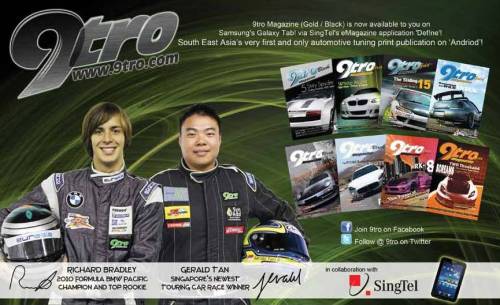